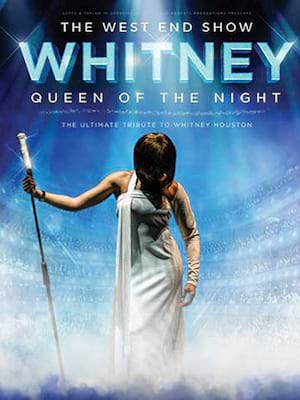 Whitney - Queen of the Night

At all times, there is a hugely enjoyable familiarity and relaxed atmosphere that entices everyone to join in the celebration of Whitney's legacy by singing along.

Why See Whitney - Queen of the Night?

Celebrating The Music Of Whitney Houston

Selling more records and receiving more awards than any other female singer of the 20th century, Whitney Houston and her set of powerhouse vocal pipes redefined the phrase pop diva. Celebrating her incredible musical legacy, Whitney - Queen of the Night brings the songstress' most memorable tunes to the stage in one of the greatest tribute productions to ever hit the West End.

Recreating iconic songs and outfits, Queen of the Night is a rollercoaster journey throughout the height of Whitney Houston's fame, from the early success of her first two albums to her Hollywood 'I Will Always Love You' era. Performed by the country's finest singers and instrumentalists, the show's feel-good atmosphere and attention to the little details mark it as a must for avid Whitney fans.

Great show, would of given more stars if we could of enjoyed and heard... more

Sound good to you? Share this page on social media and let your friends know about Whitney - Queen of the Night at New Theatre Oxford.