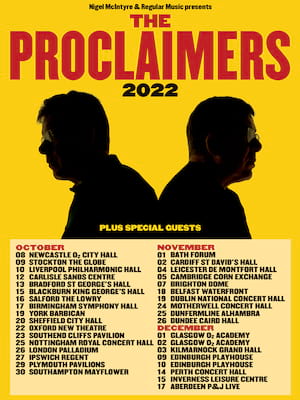 "The music of The Proclaimers has transcended decades and generations, and they continue to bring infectious enthusiasm and a raw passion for music to every performance."

Why See The Proclaimers?

the timeless songs of the proclaimers

Scottish legends and famed walkers of 500 miles, The Proclaimers, are hitting the road later this year with what promises to be their finest tour yet. With their 12th studio album in the making, twin brothers Charlie and Craig Reid will be performing shows across the UK and Ireland, playing their latest offerings as well as some of their best-loved hits.

The duo first found fame in 1993, when their iconic song I'm Gonna Be (500 Miles) reached the top five in the Billboard 100 after featuring in the quirky Johnny Depp comedy movie Benny and Joon. Achieving something of a cult following across the globe thanks to their upbeat, folksy style and distinct Scottish accents, the band's other hits include Letter From America, Sunshine on Leith, and I'm On My Way, which also appeared in Dreamwork's hit animation, Shrek.

Sound good to you? Share this page on social media and let your friends know about The Proclaimers at New Theatre Oxford.