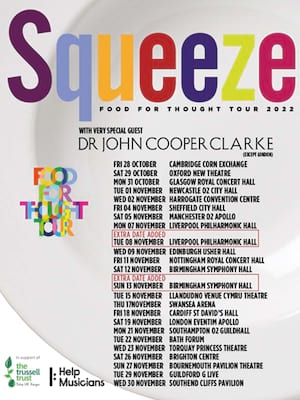 All images, graphics and logos are property of the production

Squeeze came to prominence during the New Wave movements of the 1970s and found themselves a modest but loyal following throughout the intervening years.

Their biggest chart hits include Cool For Cats and Up The Junction, as well as American chart placers Tempted, Hourglass, and 853-5937. In 2010 they issued Spot the Difference, an album of newly recorded versions of older material. By creating some of the best-loved songs of their generation, they have paved the way for many of today's most successful indie-pop acts.

In 2014 were honoured with THE PRS Heritage Award for Music, celebrating their contributions to the new wave movement. Don't miss this iconic band on the road, playing hits from their entire career, including from their critically acclaimed come-back album named after the aforementioned BBC special, Cradle to the Grave!

Seen Squeeze? Loved it? Hated it?

Sound good to you? Share this page on social media and let your friends know about Squeeze at New Theatre Oxford.