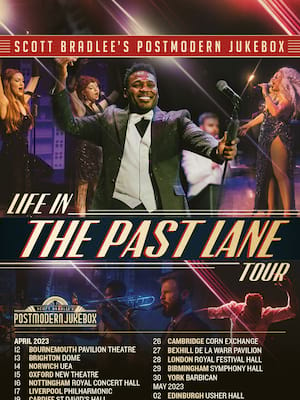 Saucy, sassy, stylish, and a with steady slew of some of the biggest pop songs in recent memory, a night out with Scott Bradlee and his cadre of musical powerhouses spells just one thing - a guaranteed party.

life in the past lane

In an age of fast fashion, fast food and fast music, a song can grace the airwaves for a matter of minutes before being replaced by the next big hit. Formed in 2011 by 'retronaut' Scott Bradlee, the ever-evolving musical collective Postmodern Jukebox messes with the mainstream formula, creating sensational covers of well-known pop songs but with a vintage twist!

Infusing the work of modern pop and hip hop stars with big band era swing, gospel and traditional jazz, PMJ went viral in 2009 when bandleader and pianist Bradlee posted a video to YouTube of a medley of 80s songs performed in the ragtime style. The group has since amassed over 757 million views to date. Offline, the outfit has cultivated a vaudeville-esque, electric live show filled to bursting with a sense of fun and high-energy performances.

Sound good to you? Share this page on social media and let your friends know about Scott Bradlee's Postmodern Jukebox at New Theatre Oxford.