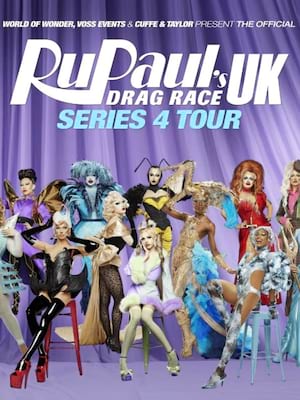 Gentlemen, start your engines and get ready to welcome the dolls from the third series of RuPaul's Drag Race UK! Featuring all of your favourite queens, including Kitty Scott-Claus, Krystal Versace, Vanity Milan and Ella Vaday. Expect fierce looks, fun, frolics, and scandal a-plenty aswell as all the charisma, uniqueness, nerve, and talent you could ask for as the queens are reunited on the road.

Spanning eleven seasons across the pond and debuting here for the first time this year, RuPaul's Drag Race flips the traditional model/beauty/pageant competition and inject a whole lot of sass into prime-time TV. Documenting Mama Ru's search to find America's next drag superstar, the program pits contestants against touch challenges each week, culminating in a lip-sync knockout battle with one queen having to sashay away. Filled with humor, drama and constant entertainment, the show has shone a light on drag queen culture and LGBTQ issues, breaking into the mainstream with charisma, uniqueness, nerve, and talent! Don't miss your chance to catch series three's queens!

Sound good to you? Share this page on social media and let your friends know about RuPaul's Drag Race at New Theatre Oxford.