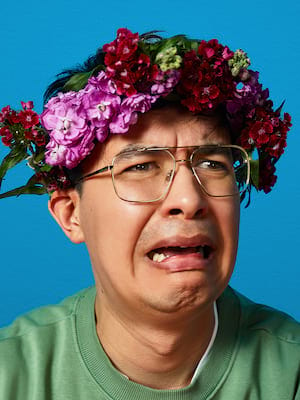 An irresistible set of smart and silly jokes

The enormously popular British-Malaysian comedian and comedy writer Phil Wang takes his stand-up tour to venues around the UK in 2023, bringing his unique, hilarious takes and anecdotes to a theatre near you. Exploding in popularity over the past few years with festival appearances, successful slots on shows both home and abroad such as Have I Got News For You and David Letterman,and now a Netflix special, the Wang train shows no sign of slowing down.

The comic is known for his humorous analysis of subject matter such as the Asian-British experience, family dynamics and food, but no subject is off the menu. Born in Stoke-on-Trent to an Asian father and British mother, Wang was raised in Malaysia but returned to the UK as a teenager. Whilst studying at Cambridge he was the president of the Cambridge Footlights and began his rise to comedy royalty in 2010, winning Chortle's Student Comedian Of The Year award.

Sound good to you? Share this page on social media and let your friends know about Phil Wang at New Theatre Oxford.