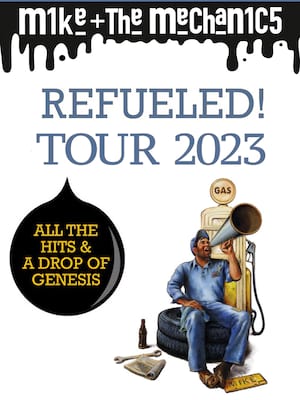 Mike and The Mechanics

The Mechanics won rapturous applause from their many life-long fans, liberally mixed with more recent converts including one seven-year-old. People were stood and swaying their arms from early in the set, under orders from the 1993-hit Get Up.

Why See Mike and The Mechanics?

What started out as a side project for Genesis bassist/guitarist Mike Rutherford, Mike and the Mechanics turned out to be a career-defining success in its own right. Rutherford formed the supergroup with vocalist Paul Carrack and a host of other talented musicians in 1985, going on to create the Top 10 smash hit singles 'Silent Running', 'All I Need is a Miracle' and 'Over My Shoulder' amongst others. In 2023, Mike and the Mechanics are hitting UK soil with their ninth album 'Out of the Blue'.

While the original line-up has changed over the years, Rutherford, the heart and soul of the project, can still get an audience on their feet dancing like he did in the band's heyday. Let the nostalgia flow!

And before you stop reading

Sound good to you? Share this page on social media and let your friends know about Mike and The Mechanics at New Theatre Oxford.