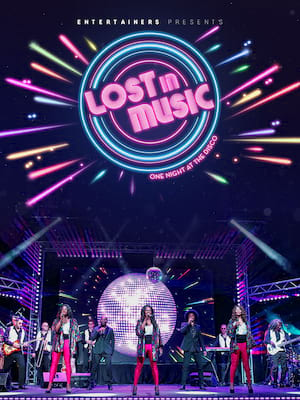 Lost In Music - One night At The Disco

A musical journey straight to the heart of Disco!

Why See Lost In Music - One night At The Disco?

The disco ball is spinning and the dancefloor is heating up as Lost In Music returns with this glorious tribute to the golden age of Disco! With all the biggest hits of the genre, expect to hear performances of songs from iconic artists including Donna Summer, Sister Sledge, Chaka Khan, CHIC, Gloria Gaynor and many more, this is One Night At The Disco you won't forget!

With a sensational live band and a cast of talented performers, Lost In Music takes us back to the halcyon days of disco when the beat-laden, groundbreaking genre ruled the airwaves and New York City's Studio 54 was the nexus of all things cool. Your best disco clobber is encouraged as you celebrate music's best decade!

Seen Lost In Music - One night At The Disco? Loved it? Hated it?

Sound good to you? Share this page on social media and let your friends know about Lost In Music - One night At The Disco at New Theatre Oxford.