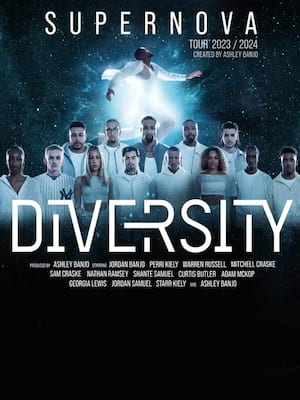 A brand new chapter that is sure to be more special than the last, Diversity are going stratospheric with their brand new tour Supernova! Created and choreographed by Ashely Banjo, prepare to be captivated and amazed once more by the dance group that has been at the top of the game for over a decade.

Formed in 2007, Diversity stole the spotlight in 2009 when they auditioned on the talent show Britain's Got Talent and they haven't given it back since. The dance group stormed their way through the competition and won the final, beating off strong competition Susan Boyle. Since then, Diversity has become a force to be reckoned with - completing ten sell-out UK tours.

And before you stop reading

Diversity have also confirmed that they will be supporting anti-poverty charity the Trussell Trust, which provides emergency food and support to people locked in poverty while campaigning for change to end the need for food banks in the UK. Attendees on the tour are being invited to bring along food donations to the shows, where there will be collection points across the venue each night. There will also be collection buckets for any cash donations.

Seen Diversity? Loved it? Hated it?

Sound good to you? Share this page on social media and let your friends know about Diversity at New Theatre Oxford.