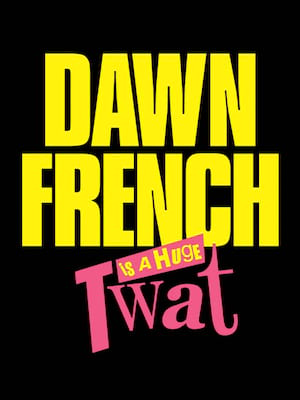 All logos, graphics and imagery are property of the production

This show is so-named because unfortunately, it's horribly accurate.

She might be a comedy icon, but when it comes to cringy mistakes, Dawn French is just like the rest of us, and her new tour, the delightfully titled 'Dawn French is A Huge T***' is set to prove it. Full of tales of buttock-clenching embarrassing moments from throughout her career, tv's cozy lady vicar casts off her dog collar to regale audiences with moments of sheer Tw****ery, in her hilarious and inimitable style.

In addition to the aforementioned lady Vicar, French has been making us laugh since the 90s, both with her comedy partner Jennifer Saunders and as a solo act. She's also an author, with two memoirs and four nonfiction books under her belt, as well as being the voice of Terry's Chocolate Orange, the Fat Lady in the Harry Potter films and much more.

Sound good to you? Share this page on social media and let your friends know about Dawn French at New Theatre Oxford.